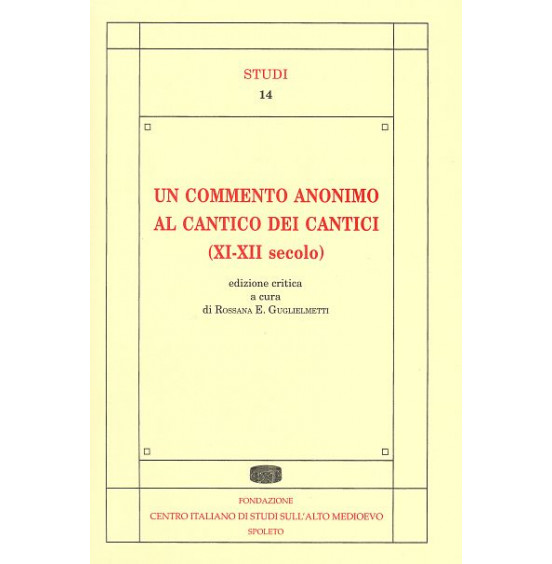 This volume offers the critical edition of an anonymous commentary to the Song of Songs, up to now completely unpublished and unknown (except for references to some witnesses in the Repertorium Biblicum by Stegmüller). The commentary had a fair fortune in Italy in XIIth century and was probably written in the Tuscan area between the end of XIth and the beginning of XIIth century, for studying Biblical text: it collects interpretations by some of the most important commentators from the Late Antiquity and the Early Middles Ages, accurately interlaced and rewritten in order to offer a well developed explanation of every verse. The exegetical line is founded on the carolingian commentary by Haimo of Auxerre, supplemented with wide contributions from homelies by Origen (in Latin version by Jerome), from Paterius’ collection of extracts from Gregory the Great, from the commentaries by Alcuin and by Justus of Urgell (a less widespread author); some readings are drawn also from the more recent work by Robert of Tombalena and from sets of glosses circulating at that moment. This commentary is an important document of the restarting vitality of Biblical studies in XI-XIIth century, specifically in a geographic area whose exegetical literature was limited. It constitutes moreover an episode of great interest, for structure and sources selection, in the production devoted to the Song of Songs, one of the most commented and loved Biblical books for the peculiarity and the theological and spiritual potentialities of its contents. This edition, with a critical apparatus that reports integrally the manuscript transmission and a sources apparatus, gives it back to the knowledge of the historians of the medieval exegesis and culture.