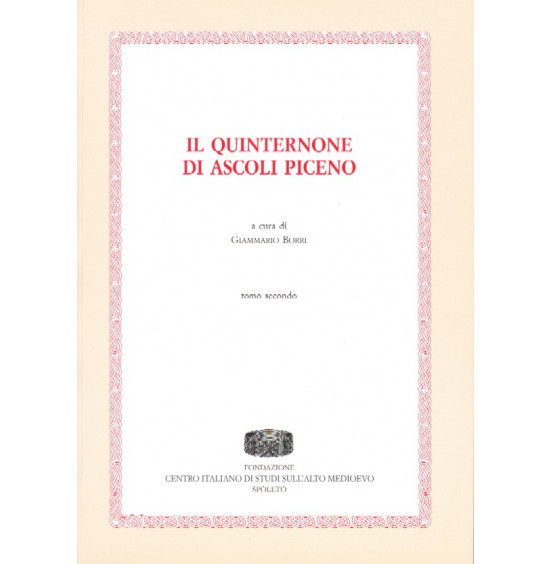 These two volumes contain the critical edition of the No.40 parchment of the ï¿½Registersï¿½ series called Quinternone found in the historical archives of the Ascoli Piceno Municipality. This collection of papers represent the liber iurium of Ascoli Piceno in which the Municipality had transcribed the documents attesting to its sovereignty over the territory, its laws, and its political and juridical prerogatives. This large volume is composed of 287 papers penned by several hands between the end of the 13th century and the second half of the 14th century, and there are also some additions from the following two centuries. Comprising 30 booklets, the volume contain 265 documents pertaining to the 10th ï¿½ 16th centuries. The Quinternone is an invaluable source from which to reconstruct the history of Ascoli, its expansion in the territory, its control over the Castles, the spread of law also in virtue of the privileges and Papal concessions it enjoyed. ï¿½It is a real treasure for the Ascolan territory,ï¿½ as Giuseppe Mazzatinti defined it reflecting on the destruction of the Municipalityï¿½s chancery in 1535 which led to the loss of almost all documentation. It is also a rich source of information relating to the border limits of the Ascolan territory, its extension and topography, its churches and monasteries, the bishop strongholds, the institutions and the history of the castles and their relation and obligations to the Church and to the Municipality. This publication is an authoritative witness to the nature of Ascolan society in the aforementioned period, of the aristocracy and the nobility and their urbanization, of the industrious local bourgeoisie and its gradual rise to power. To sum up, the text stands out for its rich variety of legal transactions, aspects which should be of some interest to the history of law as it makes a contribution to knowledge about the evolution of legal documentation in the Ascolan area.