16. Marcin Bukala, Oeconomica mediaevalia of Wroclaw Dominicans. Library and Studies of Friars, and Ethical-Economic Ideas: the Example from Silesia. 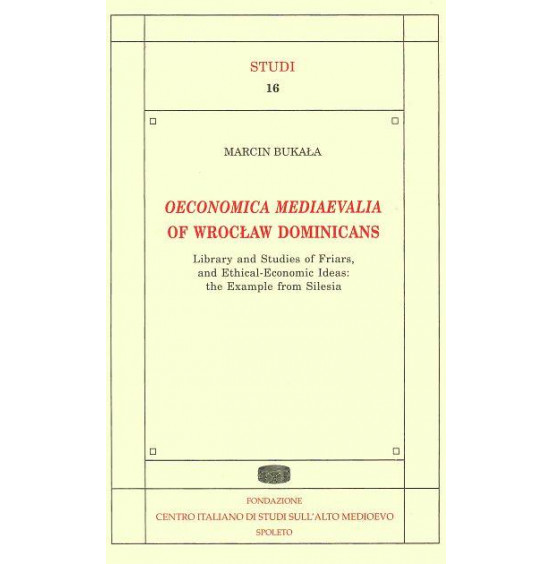 16. Marcin Bukala, Oeconomica mediaevalia of Wroclaw Dominicans. Library and Studies of Friars, and Ethical-Economic Ideas: the Example from Silesia.

The volume concerns Silesia: the region which has the significant role in the history of Poland, Czech Lands and Germany and which was on different sides of political borders during its history. The book presents the research of the author on the codices of the medieval Dominican library in Wrocław (Latin: Wratislavia, German: Breslau) – the greatest collection of Dominican medieval manuscripts preserved in Poland. The aim of the study was to analyze how medieval ethical economic ideas were spread and how they were worked out in the Central Europe (or central-eastern in the narrow sense of this term). The 1st chapter presents the significant points of the history of Dominicans in Wrocław and in contratae Silesiae and the late medieval cultural background of Central Europe, referring to the most illustrious Silesian Dominicans, including Peregrine of Opole. The analysis of the presence of ethical-economic issues in the codices of friars is presented in the chapter 2nd. This analysis is a base of the general outlook on oeconomica mediaevalia of mendicants in the chapter 3rd, which focuses especially on the authors from the Central Europe. The discourses also concern economic ethics and ecclesiology of secular masters form the end of the XIVth and the beginning of the XVth century, such as Peter Wysz of Radolin and Matthew of Cracow. Their reformists and conciliarist ideas influenced the part of Dominicans. «Appendix I» consists of the working index scriptorum referring to the most common authors in examined codices (the collection does not have modern critical catalogue yet). «Appendix II» includes the register of texts concerning economic ethics present in the researched manuscripts and incunabula.